Sri Lanka president pardons militant who tried to kill him 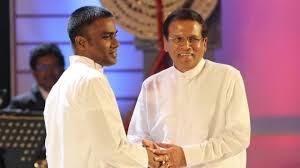 Sri Lanka president pardons militant who tried to kill him

The Liberation Tigers of Tamil Eelam (LTTE) was a separatist rebel group led by Velupillai Prabhakaran who, to his followers, was a freedom fighter struggling for emancipation for the minority Tamils.

In the closing stages of the war in 2009, both sides were accused of committing atrocities.

Upon taking power, Mr Sirisena pledged a truth and reconciliation commission to investigate the claims of abuses.

In October a government-led inquiry found that there were “credible” allegations that the army had committed war crimes during the conflict.

In the same month, 223 Tamil prisoners went on hunger strike demanding to be freed. Some have been released but most remain in prison.

A Sri Lankan soldier was on Thursday sentenced to death for killing eight Tamil civilians, including four minors, by slitting their throats in Jaffna nearly 15 years ago, in a rare case of the military being held to account for its actions.

Staff Sergeant Sunil Ratnayake was given capital punishment by a two-judge High Court in Colombo while four of the soldier’s colleagues were acquitted due to lack of direct evidence against them. The massacre at the village of Mirusuvil in the Jaffna peninsula came to light when another man in the group of civilians escaped the military attack and raised the alarm. Court heard that the victims were killed by slitting their throats and burying them in a mass grave in Jaffna. The incident had occurred on December 19, 2000. They had gone to check the ruins of their bombed homes following a ferocious bout of fighting between Tamil Tigers in that area.

Instead of the usual sweeping such allegations under the carpet, the then government of President Chandrika Kumaratunga suspended the entire unit of soldiers and subsequently arrested five men who were indicted in 2003. Following the lengthy legal process, the final decision was delivered today in a rare case of military being held to account for its actions.

“Today’s sentencing showed that the military was following due process in dealing with abuses committed during the war,” army spokesman Jayanath Jayaweera said. “This is a good example to show the system is working well,” Brigadier Jayaweera told reporters. Sri Lanka’s army faces allegations that it killed at least 40,000 Tamil civilians in the final months of fighting that ended in May 2009.

The previous government of strong man Mahinda Rajapaksa maintained that not a single civilian was killed by troops, while his successor Maithripala Sirisena has agreed to probe the allegations.

Ayubowan! The National Buddhist Authority (NBA) a well developed organizations which were officially battle against the Rascals who are in local society and who were engage as an international persons for poverty alleviation as a cover for proselytizing activity. We may put our advanced heritage presser which our ancestor did upon the peoples who dealing with converting our peoples for any other faith and Abuse (Insulting Speech) of our culture and the moral of Buddhist main concepts. We are secretly finding the necessary static data and also exploring entrench area and giving an “ON THE SPOT” action without thinking difficulty or danger that must be rise within sound of whom think that converting to their faith is fundamental right in our “Dhrama Dveepa”. Regarding need ness of the case we will report in writing with dates, place name or persons involved and all cases of abuse or illegal activities in the name of a religion or faith and first and last attempted to convert persons in Sri-Lanka to Buddhist organizations, temple, nearest Police Station, Grama Niladari and other local authority as well as presidency level. National Buddhist Authority eager to call upon all Sinhalese Buddhist organizations(International too) to join hands in a Endeavour to defeat the proselytizing efforts of sponsored evangelical and other NGO organizations and thereby to guard the Sinhalese Buddhist culture and tradition for posterity, Relating to their fantasy book,Fantasy Story David did killed the philistine champion who named as Goliath, then all of us too cannot fail. NOTE: This cite is not aimed at or against Christians Or Muslims or Any Other faith Holders.This site is aimed against Christians,Muslim or who ever seek or want to convert Buddhist to Christianity or Muslim or other goodish doctrine. We Buddhist refer to them as "missionaries." We Buddhist respect Christians or Muslim or other followers who maintain the doctrines of their belief, but we do not accept anyone's "right" to proselytize.
View all posts by ජාතික බෞද්ධ බලවේගය »
« ඉන්දීය ගුවන් හමුදා කඳවුරට ත්‍රස්‌ත ප්‍රහාරයක්‌ පාකිස්‌තානය ප්‍රහාරය තරයේ හෙළා දකී
9 වසරකට පසු නෝර්වේ යළි එයි »

This site uses Akismet to reduce spam. Learn how your comment data is processed.

Different countries have visited this site